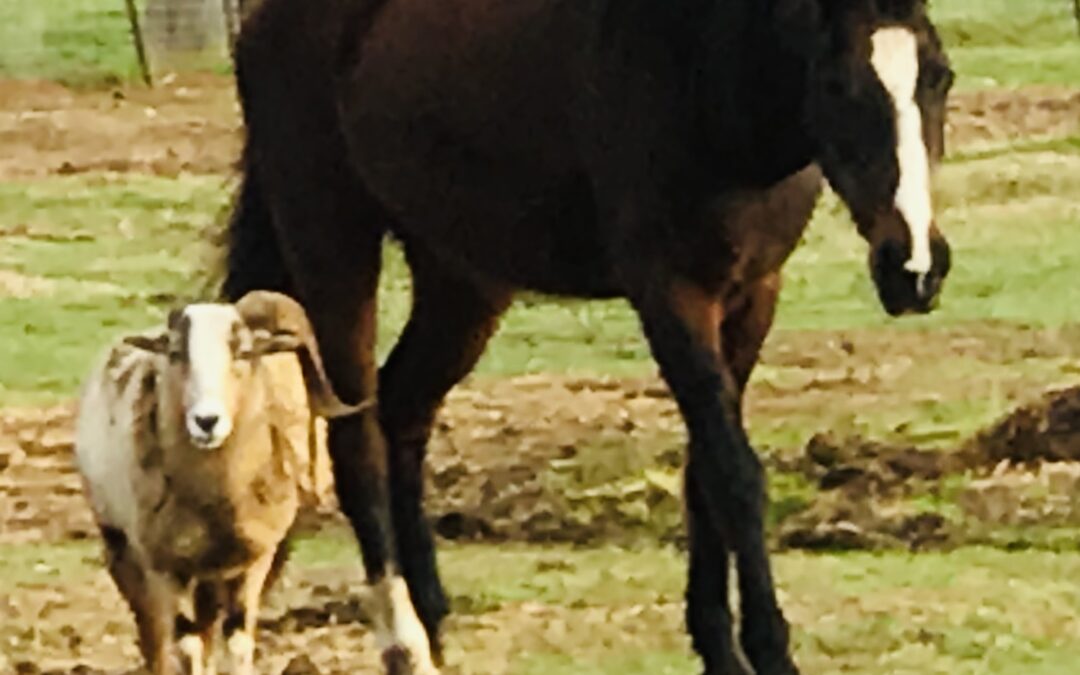 In the spring of 1997, I agreed to take on a little grade mare who had lived through hard times. She was pretty, brown with a white sock on her right hind foot and a white stripe running from her forehead to the tip of her nose. Pretty is as pretty does, because the mare I first met viewed the world through eyes that showed only the whites, her roached mane stood straight up and spiked, her teeth were often bared, ready to bite. She was terrifying to behold. If her appearance didn’t inspire the fear she sought to instill, she would wheel around and kick, sometimes with both hind feet at once. I had agreed to give sanctuary to this? God help me!

Of course I was given plenty of advice, mostly along the lines of “You don’t know what you’re doing”, “not enough experience”, “put her down before she kills you or someone else.” Every advisor had far more horse experience than I did so I listened. Sort of. On rare occasions I could actually see the mare’s brown eyes, and there was a softness in them.

I’ve been told all my life how stubborn I am. I guess they were right because I decided to do my best to help this horse. The first order of business was to overcome my fear of her. She could read it and it inspired her worse behaviors. I could actually get a halter and lead rope on her so I started with leading her. That kept me away from those hind feet so, progress, most of the time. One cold winter day she and the other horses were in their stalls for dinner and I was hanging out in the barn with them. It was quiet, smelled of hay, and the horses and I were happy.

I was standing in front of Sprite’s stall door, and all of a sudden she reached over and bit me. Even through the many layers of winter clothing, my breast bone wore the mark of that bite. A colorful hematoma didn’t waste time forming. But for the first time ever, I wasn’t afraid of Sprite. I was angry. Hands on my hips, I told her I absolutely respected her decision to never be mistreated again, but that this biting thing was simply unacceptable.

She could hear and see my anger, but also that I wasn’t laying a hand on her. Her expressive ears were turned to my voice and her eyes grew ever softer. Her lips closed over her teeth and her head lowered as if to be closer to me. A change was coming over both of us. I had lost my fear of her and she began letting go of her anger. I think she knew that regardless of my lack of experience with angry and dangerous horses, I was offering her safety and love.

Sprite began gradually to show her softer self, the self that allowed a particular barn cat to sleep on her back while she stood quietly so as to not disturb her. She liked our dogs as well as the cats and was always careful to watch where she placed her feet so she wouldn’t step on them. She loved certain sheep, but Dawn, our first donkey, was above all her best friend.

She was not, however, a fan of some of the other horses and could lash out without warning. And still the change was huge. We had another mare in those days who had come to us in foal. The baby was born on a Sunday, Mother’s Day as it happened. Sprite fell instantly in love with the baby so I had to make certain that she didn’t try to steal the little colt from his mother.

The baby grew and thrived, and the day came when it was time he was weaned from his mother. After all, he was almost a yearling. Mama horse went into one area and her son was just on the other side of the fence. I will never forget the day I walked out to find him nursing from Sprite. Sprite, a maiden mare who had never had a foal of her own, had felt sorry for the colt and allowed him to nurse. Most amazing to me was she had actually begun to lactate.

Time to move him away from his second mama. I thanked her for her concern for the colt, assuring Sprite that he was a big boy now and didn’t really need milk any more. With that, Sprite joined the other mare and Sunday the colt grew and thrived, talking to his two mamas through the fence. Sunday, the colt, is now in his twenties, still strong and beautiful.

So how did Sprite give this sanctuary its mission? When I began this sanctuary in 1997 I vaguely expected to be rescuing animals, primarily horses and donkeys, and didn’t think much beyond that goal. It began to dawn on me that there are very real limits to how many animals I could safely and effectively care for. I did not plan to seek adoptive homes for the animals, which effectively created a pretty hard limit to the size of the animal population. All the while I had no clear idea of my mission.

Life with Sprite forced me to learn how to walk face on into my fears and to keep walking to the other side. I began to let go of my own past experiences which inhibited me. Sprite was my teacher as I watched her let go of her fear of humans. I could see and feel her relax into her new life, and ultimately find her peace. We taught each other, this once angry and dangerous little brown mare and I. I came to love her and I believe she loved me in return. Thanks to our shared life, Dreamtime Animal Sanctuary’s Mission began to take shape.

“It is the mission of Dreamtime Animal Sanctuary to offer lifetime sanctuary to farm animals in an atmosphere of hope and peace.”
Sprite (January, 1992 – May, 2022): Sprite was humanely euthanized on May 5, 2022. She taught me so much in her 30 years, and I’ll be forever grateful to her.